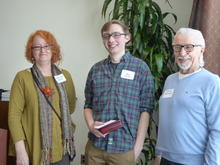 We expect you will find your way around, and find that much of the information content is current, and of broader interest than were the previous website contents.  In large part, that is because even more of the new site content is being directly provided by those who create it, instead of having to pass through multiple hands before being posted by the volunteer webmaster – which in the past happened in a big batch once a month.

A Few Tips for Using the Site

In January, 2010, former UMRA President Ron Anderson, then the webmaster, wrote a proposal to the board describing a website that included "an online membership database."  David Naumann took over from him in January, 2011.  He elaborated on Ron's concept with a more detailed design document, which was presented to and approved by the Board of Directors during Summer, 2013.  Little implementation was begun until Fall, 2013, when Naumann and two other volunteers began prototyping and testing the initial database design.   During that time, the University of Minnesota made a major commitment to a standardized website development environment named "Drupal," which was targeted for availability in early 2014.

Of course it took a bit longer, but by fall of 2014, our volunteer crew, by then up to 4 persons, began learning and experimenting with Drupal.  By May, 2015, we had a basic implementation and a few pages we wanted to keep, and that brings us to September, 2015.

This static portion of our website was turned on, “went live” September 15, 2015.  There were already quite a number of corrections and desirable improvements on our list, but we generally knew how to fix them when we found them.  The database portion of the project, the "back-end," was much more complex to build and test.  We added new "member services" one or a few at a time, after lengthy and thorough testing. We were able to go live with online member logins, online member record editing, and both new member joining and existing member renewal, beginning that annual process on July 21, 2016.

We were happy to see that nearly half of those joining or renewing during summer 2016 did so online. In November, 2016, we added the ability to make and pay for luncheon reservations online.  The full system was a resounding success during its first full year. During that year we fixed a small number of minor problems.  We were able to identify a number of changes and enhancements that will make the site a bit easier to use. These issues have been included in "Revision 1," which was completed in early July, 2017.

In Feburuary 2019 UMRA recognized Max Fierke for his continuing and invaluable assistance to UMRA and our web development.

In the summer of 2018 a major re-design was undertaken by the Communications committee, and implemented by Lee Gierke, with the ongoing assistance of Fierke.

Our Volunteer Crew and Student Workers

Cathy Lee Gierke, webmaster, who has been a volunteer  on the project since 2013, has done much of the detailed design, implementation, and documentation of the new website, is a retired IT leader, a   professional from the Carlson School.

David Naumann, Former webmaster, project manager, and chief designer, worked on the project from 2011-2019.  He retired from the faculty at the Carlson School's Information and Decision Sciences Department. Naumann served two terms as a member of the Board of Directors, and retired from his webmaster position in summer 2017.  He passed away in 2019 from COPD which he managed for many years.

Craig Gjerdingen, Application Development Manager at Carlson OIT, project planning and technical advisor on the resources we are employing and on project implementation strategy.

Max Fierke, CSCI graduate and program designer and coder who is fluent in just about any computer tool needed, Max built most of the retirees.umn.edu.  He continues to help with the most difficult technical problems.