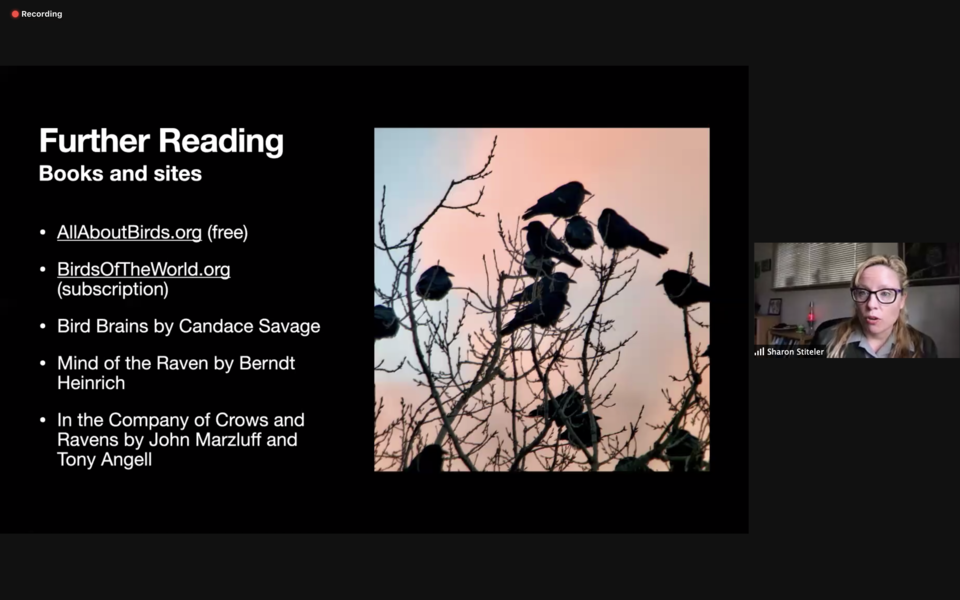 For our April 2021 Workshop, National Park Ranger Sharon Stiteler entertained and informed us with tales about the birds that frequent our area, particularly the many crows that we see congregating in large numbers, especially in the river corridor between Minneapolis and St. Paul. For reasons that are obscure, a group of crows is called a “murder,” just as a group of geese is called a “gaggle” and a group of ravens is called an “unkindness.” Especially in winter, she told us, we can see a “megamurder” of crows, a huge group of thousands.

Crows are remarkable creatures, according to Stiteler. They are among the most intelligent of birds. Not only do they use tools, but they also actually make them. Crows have been observed bending little twigs to fashion a hook that can be used for rooting out insects. Crows can recognize people and cars. They can remember specific researchers who have caught and banded them, and flee or fight at the sight of these people.

It’s not completely clear why crows gather together in huge murders, especially in cities. Stiteler said. They may do so because there are good food sources; crows are omnivores and will eat just about anything. They may be seeking protection—owls, eagles, hawks, raccoons, and coyotes, among others, will prey on them. Groups of crows will mob a predator, with dozens dive bombing and pecking the offender. Crows may also group in cities for warmth from the built environment.

A murder of crows can be very loud. The caws of crows communicate information about location, predators, and other things. One way to avoid the noise—and the mess—that a group of crows can cause is to make sure you don’t have appealing food sources nearby, such as open dumpsters.

Stiteler told us there are also other great places for birdwatching and wildlife watching right nearby. They include:

Grey Cloud Dunes Scientific and Natural Area in Cottage Grove. The dunes on the island host an amazing array of wildlife and migrating birds. Perhaps not the best place to take grandchildren because you need to stay in designated areas.

Crosby Farm and Lake in St. Paul. Great birding and nature viewing both around the lake and along the river. Lots of room for grandkids to run around.

Coldwater Spring in Minneapolis/Mendota. The native sacred site accessible from Minnehaha Park attracts otters and bald eagles, among other creatures.

Marshall Terrace Park in NE Minneapolis. A riverside park with many amenities to keep grandkids entertained while grandma and grandpa look for herons and cormorants.

Prepayment of $25 per person.

Reserve and pay online or contact Diane Young at young054@umn.edu.

Cancellations and refunds will be honored until May 13. We are not able to accommodate registrations on the day of the event.

Parking
For a discount of $1 per hour in University parking facilities, use the QR code on the back of your UMRA membership card when exiting. Credit cards only.

UMRA policy requires all participants to be vaccinated. Masks are optional.

Unable to attend in person? Please register and join UMRA’s 2022 Annual Meeting and Forum via Zoom.

Members of UMRA’s Fourth Friday Book Club enjoyed a lively discussion of author Gail Honeyman’s prize-winning debut novel and what it reveals about the importance of friendship and care to the development of the quirky main character. More …

This historical novel depicts the life of aviation pioneer Beryl Markham and the early decades of her extraordinary life growing up in Kenya. More …

We need a leader for our September 19th hike. If you are interested in leading a hike in your favorite park that day, contact Bev at bevmoe@umn.edu.