HELLO, my name is Julie Medbery 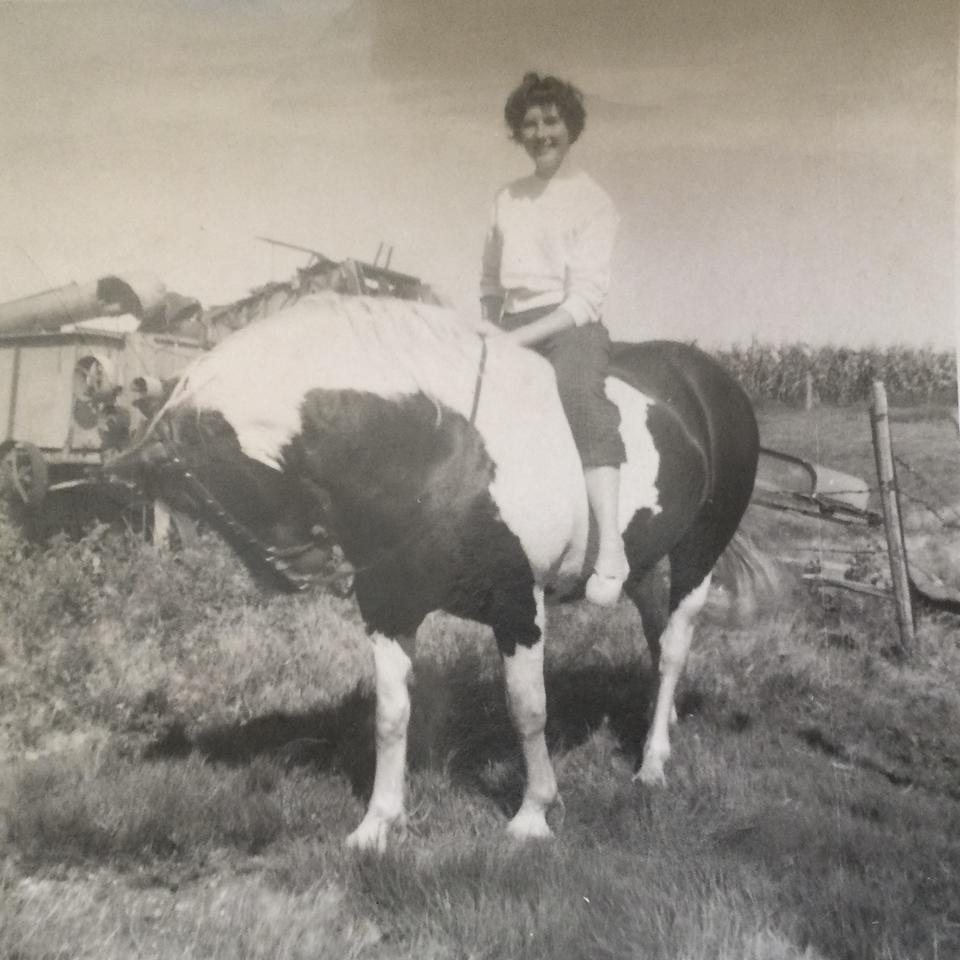 Summer 1959. “I bought Polly by selling a 4-H calf in 1955. She was too wide for a saddle and too stubborn to stand by any kind of support, so I had to grab her mane and jump on.” —Julie Medbery

Hometown: Browns Valley, Minnesota. I grew up on a farm in South Dakota, just over the state border, but attended school in Browns Valley.

When did you join UMRA? 2007. I was the second civil service retiree to join, following Ginny Hanson (and at her invitation).

What was your very first job? I had two, actually, both brief, between my freshman and sophomore years at Augsburg College (now University). The first was on a manufacturing line in south Minneapolis, where I joined several other women wearing thin white cotton gloves to inspect small pieces for big lighted, animated Hamm’s Beer bear signs. After a week, I was offered a supervisory position, which I knew would be ill-fated, so I quit. That same month, my college roommate recommended me for a job as a kitchen assistant at a hospital in south Minneapolis. A big part of the job was to wheel food carts around to deliver meals and collect the dishes. Because of my propensity for getting lost, I often found myself in strange places, and way off schedule. The culmination was when I accidentally wheeled my cart into the morgue—the deciding factor for me to part company with that job as well. My long-suffering parents subsidized the rest of my summer in Minneapolis before I returned to Augsburg in the fall.

What was your occupation when you retired from full-time work? I was staff assistant to the dean of the (agricultural) Extension Service, where I managed and staffed a state-wide citizens’ advisory committee, produced a weekly newsletter for Extension personnel, started a student intern program that lasted several years, and performed the usual tasks. At one time I knew the names of all the nearly 200 Extension educators across the state.

What was your first car? A dark-green Plymouth Fury III, which my dad bought for me in the belief that bigger was safer. I traded it in for a Datsun B-210, one of the smallest cars available at the time. The first time I drove it home, one of my brothers lifted the right front wheel off the ground. I don’t think my dad was impressed.

If you were an Olympic athlete, what would you like your sport to be? After seeing Gophers wrestler Gable Steveson win gold this summer, I think I’d like wrestling to be my sport. My favorite take-away was when he told a reporter, “Little cat came out to play with the big dogs.”

What is something you currently enjoy doing with your time? For the last few years, I’ve been sorting through long-ignored boxes and writing up stories about family items and photos and then sending both items and stories off to various nieces and nephews. The latest was handing off a small jar of marbles—some clay, some porcelain, among more recent glass ones—along with the marble bag that had belonged to my dad, to my nephew who lives on the home farm. He was tickled to get them.

Prepayment of $25 per person.

Reserve and pay online or contact Diane Young at young054@umn.edu.

Cancellations and refunds will be honored until May 13. We are not able to accommodate registrations on the day of the event.

Parking
For a discount of $1 per hour in University parking facilities, use the QR code on the back of your UMRA membership card when exiting. Credit cards only.

UMRA policy requires all participants to be vaccinated. Masks are optional.

Unable to attend in person? Please register and join UMRA’s 2022 Annual Meeting and Forum via Zoom.

Book notes | Strangers in Their Own Land

On June 24, at the end of a week like no other (House Jan. 6 committee hearings, and Supreme Court decisions on gun control in New York and overturning Roe v. Wade), UMRA’s Fourth Friday Book Club had a deep and passionate discussion on Strangers in Their Own Land by Arlie Russell Hochschild. More …

Thirty members of UMRA met with first-year Regents Kodi Verhalen and James Farnsworth via Zoom in late May for an engaging conversation about the critical issues currently facing the University and the important role that retirees can play. More …

UMRA returns to campus for May 2022 Annual Meeting and Forum

The Retirees Association held a celebratory and well-attended annual meeting and forum on May 24, welcoming Provost Rachel Croson and CLA Dean John Coleman to our first in-person luncheon gathering at the Campus Club since February 2020. More …

Minnesota's state parks and trails offer outdoor activities for all

Spending two hours outdoors may be “the new 10,000 steps,” and Minnesota’s state parks and trails are a wonderful resource waiting for us to enjoy and nurture them. More …